Rainmeter includes tools that make it easier to share skins that you have created with other users. This page describes how to use the Skin Packager feature, and offers some guidelines for distributing a new skin in a public gallery, such as deviantArt.

The Skin Packager is used to create a "package" file that contains all of the files needed to install a skin in Rainmeter.

The package file is created in the "Rainmeter Skin Installer" format, with the extension .rmskin. The file is actually a modified zip file, with the addition of certain metadata that is used to verify the integrity of the package. (As of version 2.3, Rainmeter will not install a normal ZIP file changed to the ".rmskin" extension; the package must be created with the Skin Packager.)

To launch the Skin Packager, open the Manage window and click the button labeled Create .rmskin package... in the bottom-left. 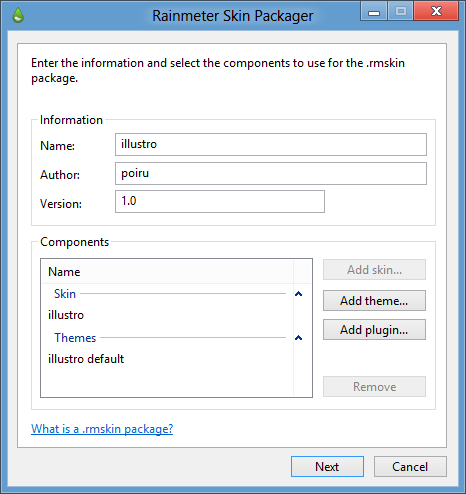 Start by providing some basic information about the skin:

Next, choose the files that will be added to the package: 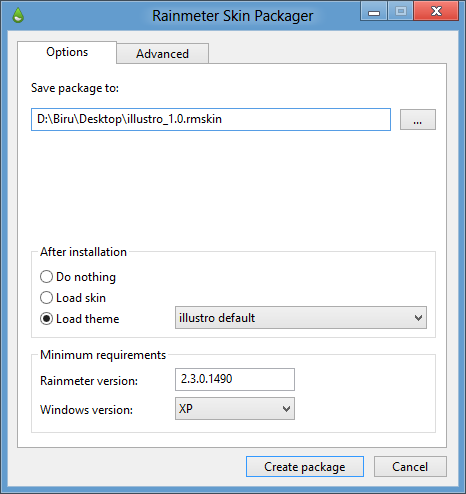 All of the following fields are optional. The default settings are appropriate for most skins. 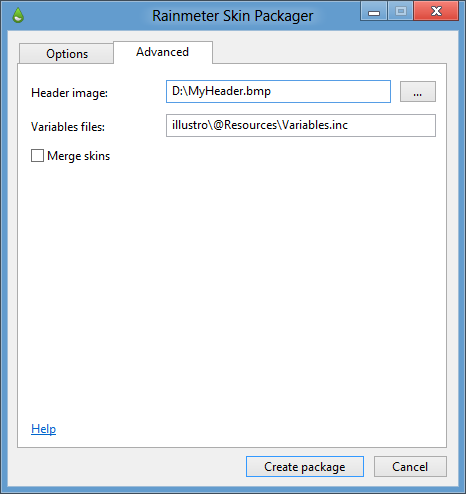 For additional options, click the Advanced tab at the top of the window.

Finally, click Create package to complete the process. It may take several seconds to create the package, depending on the size of your skin. The file will be saved in your chosen location as Name_Version.rmskin (using the "Name" and "Version" fields that you entered in the first step).

The Skin Packager will ignore any hidden files or folders in your root config folder. You can take advantage of this behavior by storing development files (such as Photoshop "PSD" files, or backup copies of skin code) as hidden files, so that they are excluded from the final product.

When distributing a skin to a small or private group of users, strict adherence to standards probably isn't too important. However, you may want to publish your finished work in a public repository like the Rainmeter skin galleries on deviantArt for other users to discover, download and share. In this case, taking the time to follow a few simple guidelines will be helpful to you, your users, and the Rainmeter community at large.

Use the Skin Packager.

Most sites that allow users to publish their Rainmeter skins now require the skins to be uploaded in the official ".rmskin" format created by Rainmeter's built-in Skin Packager. This is not only more convenient for regular users, since a skin package can be installed automatically in just a few clicks—it is also safer. Rainmeter always checks the validity of a skin package before installing it, to ensure that the package was created by the Skin Packager and not modified or tampered with in any way.

As with any open-source software ecosystem, malware disguised as Rainmeter skins has been an occasional concern for the community. By using the official format, you can help us reduce this concern by promoting a more secure method of distribution.

Many skin authors tend to ignore the [Metadata] section in their skins, because it has no effect on a skin's function or performance. But there are good reasons to make sure your skin is fully-tagged before you release it into the wild. A skin with complete metadata is easier to find in the Manage window, and offers a reliable, built-in way to provide users with setup and usage instructions, or at least direct them to a webpage or readme file with more information.

In addition, because a skin's code is often copied or excerpted in posts and comments across the Internet, good metadata makes it easier to trace the code back to its source. The Version tag is especially helpful to avoid confusing multiple revisions of the same skin that have been released at different times.

Choose the right license for your skin (and respect others').

The Rainmeter community is built around a free, open exchange of ideas and resources. We wholeheartedly encourage skin authors to release their works under terms that allow other users to borrow their code and concepts, modify them, and release them in a new, unique form. We believe that this kind of frictionless collaboration is a big part of what has made the Rainmeter ecosystem thrive.

There are a number of open-source software licenses available, and it couldn't be easier to add them to your Rainmeter skin: just paste the name into the License tag in your [Metadata] section. The following licenses are commonly used for Rainmeter skins, plugins and addons:

That said, the same rule applies to Rainmeter skins as it does to any other content on the Internet: if you are not explicitly given permission to use it, you don't have permission. You really need some indication of consent from the creator - even a quick email is enough. In addition, it's always a good idea to credit the original creators when you post your own skin, even if their license doesn't require it. This means not only the original author of some code that you have modified, but also any images, addons, plugins and fonts that are not your own.

Make sure your license and credits are included both on your download page (for example, in the deviation comments on deviantArt) and somewhere in your skin package (either in your metadata tags, or a separate "readme" file).

Clean up your layouts.

The ability to include a custom layout with your skin can make for a great presentation, especially in a large "suite", where it is helpful to provide a template or starting point for your users to get started on customizing their desktops instead of loading skins one by one.

While arranging a layout on your own desktop, and using the Manage window to save it to a file, there are some steps you can take to make your layout load smoothly and cleanly on other users' desktops: