If this is your first experience with Rainmeter, then you're in the right place! Getting Started is a guide designed to walk you through the basics of setting up Rainmeter, using, customizing, and ultimately creating your own skins.

Before you begin, here are some frequently-asked questions about what Rainmeter is and how it works.

Rainmeter is a free, open-source application for Windows PCs. It is a platform that enables skins to run on the desktop. 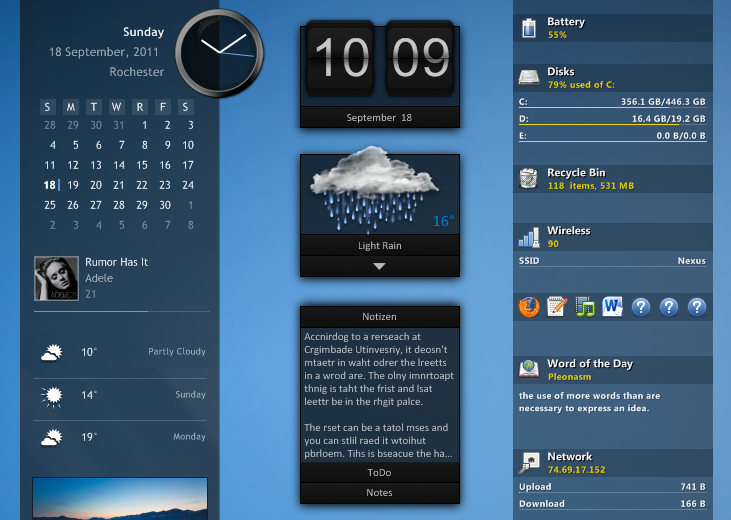 Some Rainmeter skins. Each skin is a separate window, and can be moved around on the desktop by clicking and dragging. Rainmeter can run any number of skins at one time, even from different sources.

A skin can be many things. Some skins are very simple, single-purpose tools, like Windows desktop gadgets, or "widgets" on an Android device. Others are more complex, like miniature applications themselves. Some skins even come bundled in large "suites" and include their own tools for customizing their form and appearance, within or alongside Rainmeter's basic user interface. Every skin works differently, depending on the choices of that skin's individual author.

However, all skins are made from the same building blocks: measures, which gather information from your computer, a website, a text file, or some other source; and meters, which create visual elements in the skin's window, such as frames, borders, backgrounds, images, text, charts, or buttons.

Skins can interact with other skins and applications using special commands, called bangs, and they can be customized by changing short lines of text, called variables. All of these things are made possible by Rainmeter's unique code language, which allows a skin to access functions and resources built into the Rainmeter application. Every skin's code is completely open, and can be tweaked, modified or even completely rewritten using any text editing software.

How much technical skill do I need to use Rainmeter?

If you only want to download skins from the Internet and use them as-is, then the answer is "none." Rainmeter provides a basic user interface for managing your library of skins, saving and restoring layouts, and changing basic settings such as a skin's location, transparency, and "always on top" behavior.

Most Rainmeter features can be reached through the basic Manage window or context menus.

Some skin authors create their own controls for users to customize their skins. These controls may be included as a separate utility, or they may be created entirely within Rainmeter as another skin. If this is the case, then you will not need to know any code to customize these skins.

In other cases, you may need to change some variables in the skin code. This may be scary if you are not a programmer, but usually, these "variables" are clearly labeled, located near the beginning of the file so that you don't have to do any searching, and are accompanied by helpful instructions and comments. 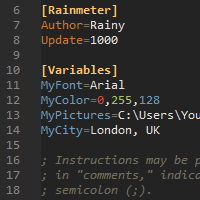 An example of some Rainmeter code.

If you want to create skins, or modify someone else's skin beyond the customization options that the author has provided, then you will get some hands-on experience with Rainmeter's code language. You do not need to be professional programmer to become a proficient writer of Rainmeter skins—although those skills will certainly help you, and a full-powered scripting language is available for advanced users. But all of a skin's basic properties are written using a simple configuration language that is suitable for novice programmers. The difficulty level is similar to that of HTML or JavaScript.

Rainmeter is just one of many different tools that you can use to customize your Windows PC. It includes a powerful and flexible set of features, and we are continually surprised by the creative ways that those features are used. However, it is important to understand what Rainmeter does not do:

In short, you cannot usually download and apply someone else's amazing desktop transformation in one click. Most customizers are courteous enough to provide links to the myriad programs, plugins, icons, wallpapers and other materials that they have used.

Continue to: Setting Up »